I am in the lobby of my hostel in Prague. When I got here yesterday it was cold and rainy, and I walked around the city, my shoes and socks sopped. I ate at a classic Czech diner, classic Czech food – goulash, salted ham, bacon, sausage, bread, dumplings, sauerkraut. I drank pilsner out of a heavy mug, and watched the trams going by outside & the circus of people. There were these 2 Czechs sitting across from me. They were eating and drinking the same thing I was, except they had a jarful of vodka on the table & they kept taking shots throughout the meal. The Czech Republic has the highest alcohol consumption rate per capita in the world. My only complaint is you can’t drink in the streets, like you can in Germany, and the toughest thing to figure out is the money. My meal yesterday cost me $200. Two hundred Czech dollars, which I guess is about $10 euro or $14 dollars.

“Prague doesn’t let go, either of us. This old crone has claws. One has to yield or else. We would have to set fire to it on two sides, at Vysehrad and the Castle: only then would it be possible for us to get away. Perhaps you’ll give it some consideration before carnival.” ~ Kafka

Another thing about Czechs (the men in particular) is they don’t know how to dress. They’re the only people in Europe who dress worse than the Americans. I don’t where they get their clothing ideas – acid-washed blue jeans with all these superfluous pockets and zippers in them, furry pullover sweaters with triangles & parallelograms & other crazy geometrical shapes stitched in. You’d need a Euclid type to put it all together.

I just got my hands on the Odes and Epodes of Horace. Now I can see why he’s been around for 2000 years:

He whose impious hand has strangled
his aged father deserves to eat it. It is
more harmful than hemlock. Garlic.
Peasants must have iron guts.
What venom rages in my gizzard?
Have these roots been stewed
in viper’s blood without my knowledge?
Has Canidia handled this evil dish?
Medea infatuate with Argonauts’ captain
(more fair than all his crew)
when he tried to yoke the unbroken bulls
anointed her Jason with this;
and before she fled on the great winged worm
she took revenge on his mistress
by making her gifts besmeared with this.
Never did such a fiery, stifling heat
settle on drought-parched Apulia.
Nessus’ shirt did not sear
more swelteringly into
resourceful Hercules’ shoulders.
If ever you are tempted this way again,
mu humorous Maecenas, I devoutly hope
that your girl will push away your face
and retreat to the very edge of the bed. 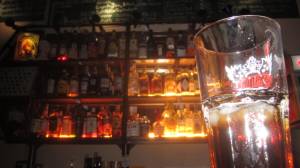 i drank last night with an englishman, 3 americans, a finn with a bad haircut (he looked like jeffrey dahmer in a tracksuit) 2 malaysian women, a bulgarian austrailian with a beard long as your arm, a cueball head & a strange name. a biblical name. a name like effron, or jeremiah. he was with one of the malaysians.
i was slowly making a move on the other malaysian, but then i had to refill my beer and a chinese-austrian sidetracked me and i ended up talking to him for about 10 minutes. when i came back a 25 year old american nanny stole whatever mojo i thought i had with the malaysian. i shoved into my seat and the two were staring at each other, smiling, long & very awkward. for a minute i felt like gagging. “ah, who cares?” i told myself. “let him have her. she’s probably more problems than she’s worth.” damn 25 year old american nannies. i glanced over at the other table and noticed jeffrey dahmer was glaring at me expressionless. “drink yor beer,” he said.

this guy’s expression is priceless. i got on the train saturday at 3:30 a.m., and had to walk around the pile of puke you see there on the floor. a little while later the guy in this pic was passed out cold. it didn’t dawn on me till i went over the pics today that he was the guilty party. at least he moved away from it a little bit.