I stayed in a hostel when I was in Weimar. I slept in a room with six other people. There were three young girls from Thailand, two German girls (teenagers) and a Chinese guy. The girls were all saints. They didn’t make a sound all night. The Chinese guy sleeping next to me snored like some big old lazy-ass bear. A bear that had just been shot in the ass with a pellet gun and didn’t even care. Great dragged-out snores with a protracted gurgling sound in the middle of each one. I wasn’t much of a saint though either. I kept waking up, stumbling through the room, banging into whatever the hell, and then out into the hallway bathroom for another big boozy beer piss. In the two nights I was there, I probably got 4 hours of sleep. I don’t know what the girls were thinking the whole time. Like I said, they were saints. 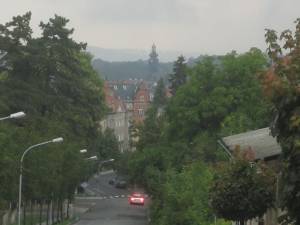 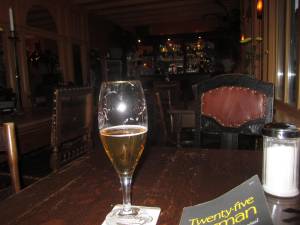 An Evening With the Charles Bukowski of Berlin

Someone, at sometime had christened him with the sobriquet “The Bukowski of Berlin.” His name was Rob. He was the organizer of the poetry event at the King Kong Klub.
I got there early and asked if I could read.

“Yeah,” he said. “We still have a couple slots open. We’re choosing the names at random. Not sure exactly when you’ll go on.”

I figured that meant I was going on first. My luck. I bellied up to the bar, ordered a beer. I sat next to a fifty-year-old Danish filmmaker named Claus. He was in Berlin for a week. He was looking for inspiration for a film he was doing. I was in Berlin for as long as the German government would have me. I didn’t know what I was looking for. I think maybe Nosferatu.

“So, how long have you been here?” asked Claus.
“Just two weeks…”
“Have you ever been to a poetry reading before?”
“This is the first. You?”
“Yeah, I’ve been to a few. They’re pretty good here in Berlin.”
“I can imagine,” I said.

The room was smoky and dark, suffused with a deep reddish light. The walls were red and orange and seemed to groan and bulge a little with all the wet, discordant sounds. There were fat couches all around and people on the couches dressed mostly in black. Little red and orange lights hung over the stage.

After about twenty minutes, Rob went up.

The Bukowski of Berlin. He was big, muscular, with a beard and close-cropped hair. He was British. And there was some kind of newfangled keyboard apparatus up there with him. It had all these plugs sprouting out of it, magical knobs and buttons and discombobulated gadgetry, wires snaking all over the floor. He did a little intro, then whirled up the sound.

“My first poem is something that takes me back ten years…”

He leveraged himself with the microphone stand and the keyboard and half-hunkered in some kind of apish stance. And then as the music oozed out, he tapped lightly his foot.

“One more time Tagshimi, and I’ll tell you all my secrets…”

There’s a beer in Berlin called Berliner Pilsner. In the two weeks I’d been in town I’d drunk enough beer to sink an elephant or two. Tonight would be another great filling and sinking, no doubt. I ordered another and listened to Rob and his keyboard sounding away. I didn’t have a keyboard to backup my verses. I didn’t know any of the musicians. All I had was the Greek chorus going off in my head, androgynous dolls clicking and bumping around and my imaginary mortuary van.

“The kiss went deeper, as if by tasting every crevice of her mouth and nipping her lips, I could memorize her, save this moment forever.”

The second act was a young Tiny Tim spin-off with a ukulele. He was not a poet. He sang and banged the strings and put on a great little knockabout performance. When he was done, he took a well-deserved bow and soaked in much applause.

The keep swiped my empty and leaned forward. “There is so much art or music or whatever out there,” he said, “that is so much better than what you get via the mainstream media. It just floats around, never comes down. And most people are too lazy to reach for it. They just want to be served.”

A bald keyboardist out of Wales was next. He had a slender build, was dressed all in black. He muttered a few wry jokes which didn’t get much reaction. “They’re funny … jokes,” he insisted. “It’s just…”

His fingers danced on the keyboard. Lalalala…

“The problem with us Europeans,” said Claus, “is we’re too inward on stage. We suck everything in, instead of engaging the audience. That’s one thing Americans know how to do – engage the audience.”

A few hours had passed, and my name still hadn’t gotten called. In a way I was happy about it, but on the other hand, I just wanted to get the thing over with. I was never much for poetry readings. I especially wasn’t much for performance poetry readings and me being the only damnfool who had to read dry. But I had a couple books in my backpack I wanted to sell.

I forged on with the pilsners.

I never caught her name. She was a local poet who wrote in both English and German. She was pretty, with short blond hair, a gloomy somewhat bookish disposition, and the intense gaze of a true artist. There was a guitarist who went up on stage with her, but her words didn’t need the musical backdrop. They had a life of their own. She spoke about her uncle who she witnessed beheading chickens when she was a little girl, life in Berlin just after the wall came down, a few other things I can’t recall.

After she was done, Rob shoved his way back on stage. He wasn’t completely happy with the three poems he read earlier, he said. He read one more. It was about an experience he had in a cafe. The person sitting in front of him was watching porno on his laptop. I guess it got the attention of a few customers, and at the end of the poem either Rob or someone or the guy with the laptop had supposedly gotten a hard-on. “Hard-on” was the punchline and the last line. And after Rob delivered it, he filled the room with a great wave of milky laughter. A couple of courtesy claps echoed here and there, drinks were drunk, throats were cleared, but it really didn’t matter. Rob tromped off the stage as though he’d done his sobriquet justice and the Grail had been seized.

A couple musicians came on next, then a young lady from Oakland gave out little pieces of paper on which audience members were to write “the meanest thing you ever heard said to a girl…” We scribbled, folded the notes, put them into a hat, and she went backstage. When she came out, she was naked. She took a bag of flour, dumped it over her head, painted “FUCK ME” on her chest with red lipstick. Then a guitarist came on and played some weird sounds and she went around the smoky room with her hatful of notes.

“How the hell,” I asked Claus, “am I supposed to follow this up with some lousy poem of mine?”
He laughed. “But you do see what I mean about engaging the audience?”
She came to me. I pulled one of the notes out.
“You’re fat and ugly,” I said.
She looked down.
“Thank you…”

She was actually quite pretty and well put together. I’m sure that helped her nerves a little. My nerves were shot. Even the beer wasn’t doing a thing, even though I’d had about ten or twelve. I switched up to Wild Turkey and Coke.

Then Lady Cassandra came on.

She was wearing a black dress and black pantyhose and a purple wig. She had a keyboard player and guitarist behind her. She came down off the stage, strutted about the room.

I liked her stream-of-consciousness style, but when she grabbed her notebook and started reading, she knew she needed something else. “America you are Britney Spears and you are Michael Jackson and you are Burger King and Wal-wart…”

Towards the end of her performance, Claus spoke out. “She’s dragging this on too long.” He leaped out of his stool and stormed the stage. He stood a little in front of her, crouched down in a four-point stance, lowered his head. Lady Cassandra then slithered forward, wrapped her one leg around his neck and pulled him in under her dress. Claus was all
about audience engagement, and he was right. She kept him under for a minute…

“I will take off my panties, sing karaoke and run around Mauerpark in the dark…”

The last performer was an Aussie with a violin.

My name never was called, at random, or otherwise.

Apparently “The Bukowski of Berlin” had forgotten about me. Or maybe it was intentional. I didn’t ask. It really didn’t matter either way, I guess. Someone got my money. And then, there was a cover charge too.

I never did sell any of my books. I gave one away to my new friend Claus. Then I slumped down in my chair, in the dark, drunk, and let the last sounds wash over me.

I had a great time going into the forest a couple weeks ago. The Grunewald was one of the most peaceful and spiritual places I’ve ever been. I was reminded of the Brothers Grimm when I was there. They are buried in Berlin & I have to think some of their stories are borne of this place. 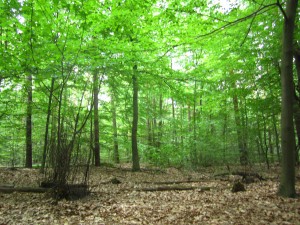